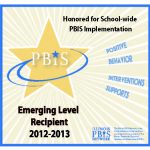 PBIS is a proactive systems approach to preventing and responding to classroom and school discipline problems. PBIS will be implemented in all grades. Emphasis is directed toward developing and maintaining safe learning environments where teachers can teach and students can learn. In addition, student achievement improves when academic time is increased by a reduction in time spent with behavioral disruptions.  PBIS and the discipline policy are the same policy.  We as a school district are attempting to reward our students for the positive things they are doing, and the discipline code and PBIS are in place to compliment each other.  PBIS website